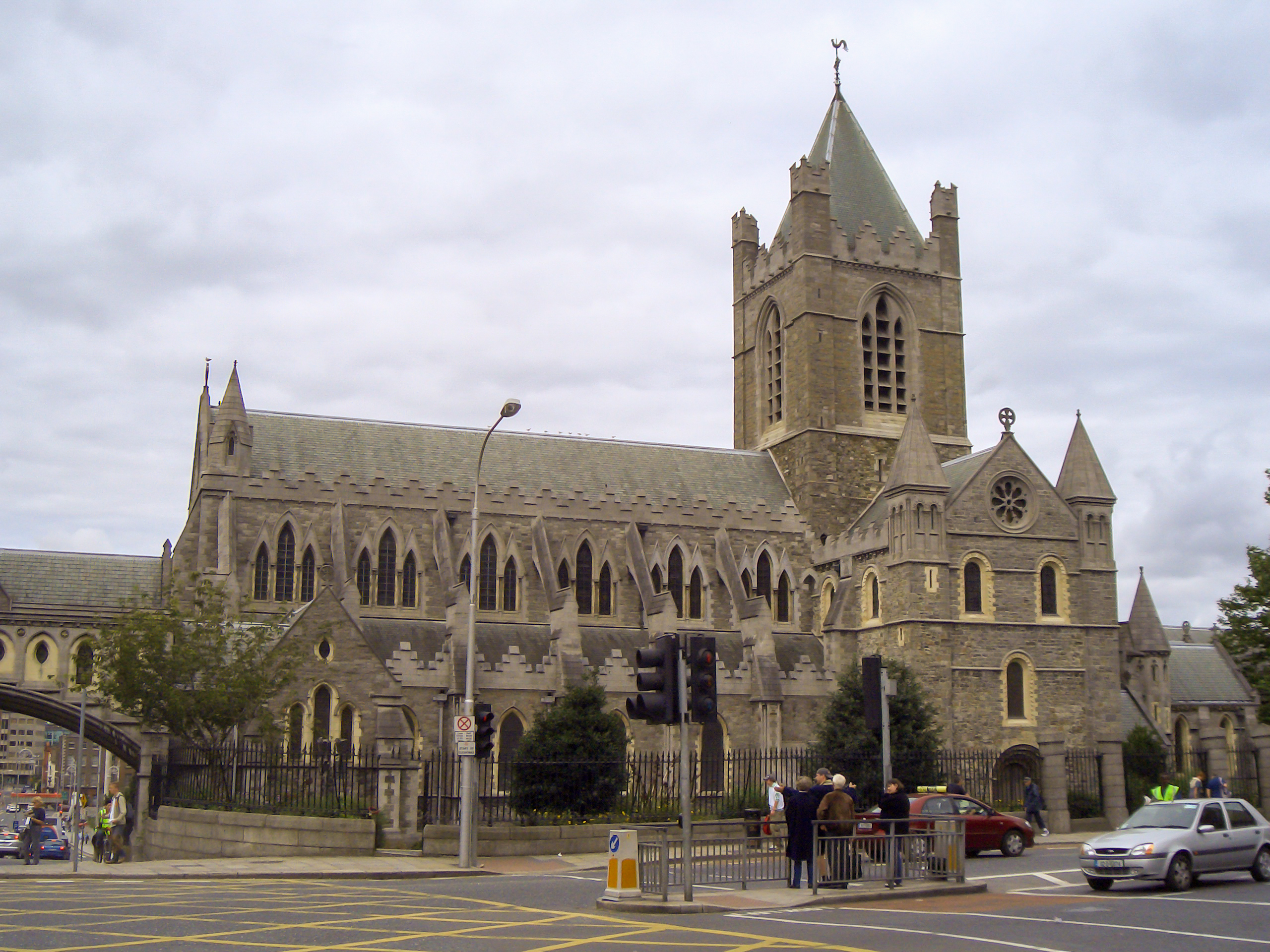 Christ Church Cathedral (or the Cathedral of the Holy Trinity)  is located at the heart of Dublin, on high ground and can be seen from the river Liffey. It is officially claimed as the bishop's seat by both the Church of Ireland, which has effectively put it into service since the English Reformation, and the Holy See, although the Archbishop of Dublin uses St. Mary's as his pro-cathedral.

Christ Church Cathedral was first mentioned in a manuscript around 1030 and 1172 a rebuild in stone was initiated by Archbishop (and later patron saint of Dublin) Laurence O'Toole, who had previously converted it's organisational leadership to a priory under Reformed Augustinian Rule. Parts of this original stone cathedral, most notably the crypt, survive to this day.

The cathedral underwent multiple restorations and was added to over the centuries as was the Long Choir in 1358, but the most notable project was undertaken from 1871 to 1878 after the nave foundation had slipped in 1562 and been only partially repaired. It was paid for with the sponsorship of wealthy distiller Henry Roe and carried out by architect George Edmund Street.

The renovations were extensive and to this day it remains difficult to judge which parts of the building are genuinely medieval and which were added in Victorian times (contemporary photographs suggest a change of considerable size). Newly rebuild were the tower and the south nave arcade, the Long Choir was demolished and replaced by a new eastern end covering the original crypt. The Synod Hall was build over the remains of St. Michael and All Angel's Church (formally an unrelated building) , incorporating it's old tower and linked to the cathedral by a passageway.

Christ Church Cathedral can be seen as a reliquary in a number of ways.

Firstly it used to contain a major relict in the conventional sense: the heart of Saint Laurence O'Toole, which was stolen in 2012 and never recovered. It is also burial site to a large number of former bishops and archbishops.

Secondly it is connected with historical personages that had a large impact on the city of Dublin and Ireland as a whole. The nave houses the rebuild tomb of Richard de Clare (better known as "Strongbow"), whose arrival in 1170 marked the beginning of Anglo-Norman involvement in Ireland. From the 16th to the 18th century the habit of finalising legal agreements here prevailed.  Henry II., the first English king to hold a degree of power in Ireland is said to have heard mass there. Christ Church also hosted some historical occurrences such as divine service being conducted in English instead of Latin in 1551 and the Bible being read in the same manner (1560) for the first time on the island, following Henry the VIII.'s English Reformation.

Thirdly the cathedral contains a number of non-religious relicts such as the oldest secular carvings in Ireland, the stocks made in 1670, used for the punishment of offenders, and most notably the mummified "Cat and Rat", invoking a sense of the past through contact with the objects; as well as some non-conventional relicts of religious identity like the tabernacle and set of candlesticks used when the church last operated briefly under the "Roman rite" and a group of historic books and altar goods.

Lastly the Synod Hall being build over and incorporating St. Michael's serves as a reliquary for parts of the historic city fabric.

Christ Church Cathedral before the renovation in the 1870's